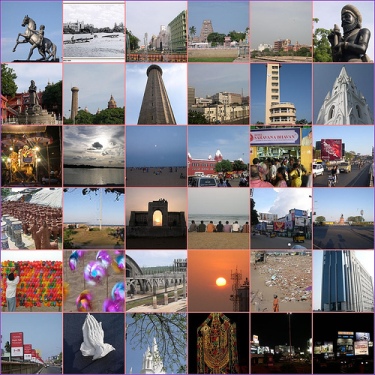 Avadi - Armoured Vehicles and Ammunition Depot of India
• Adyar - Banks of Adaiyaaru
• Ambattur - Aimbathi ondram oor (51st Region) in the list of 108 Shakti temples
• Amjikarai aka Amaindhakarai - Bank of Cooum
• Anna Nagar - After Annadurai and was developed during his reign by TNHB.
• Ashok Nagar - After the famous Ashoka Pillar
• Ayanavaram - Ayan means "The one", accounting to a shiva templesituated in the area
• Besant Nagar - After Annie Besant
• Chetput - Named after a Chetty Zameen who ruled here
• Chindadripet - Chinna Thari Pettai, due to the weavers population in the locality has evlolved its name into its present form.
• Chromepet - After the old Chrome factory
• Egmore - The land of the rising sun. (Anglicized from Ezhumboor) Higher Mean sea level than the other places in Old Madras. There is a Shiva temple here commemorating the same fact
• Guindy - After the Guindy (Rammer) which Bringi Maharishi planted in this place to begin a great Yaha (Sacrifice) against Goddess Parvati
• Kodambakkam - After Karkodagan, the mythical snake which worshipped Shiva, who hasa temple here as well
• Kothavalchavadi- Tax collectors are known as Kothaval. Chavadi is the tamil term for Kiosk/ Booth. This was the frontiers of the old city where taxes were levied.
• Koyambedu - After the Ashwa medha yagam done by Lord Rama, his sons Luv and Kush tied the horse in Koyambedu. Koyam means horse in Sanskrit.
• KK Nagar - After Kalaignar Karunanidhi and was developed during his reign
• Mambalam - Maha Vilva Trees.
• Mandhaveli - Mandhai means herd and Veli means space. Must have been herdland previously.
• Mylapore - Mayil means peacock.The goddess Parvati is said to worshipped Lord Shiva in the form of a peacock here, to get absolved of a sin. So, Mayilapuram (puram meaning city) - became Mylapore
• Nandhanam - Previously Gambier's gardens, was renamed by Rajaji as a part of creating Greener Chennai. Nandhanam means Garden. And apparently thename of the Tamil year "Nandana" it was chistined.
• Nanganallur - Nangai Nallur/ Thillai Ganga Nagar, coined by Kanchi Shankaracharya
• Parrys - Named after a merchantThomas Parrys who estabished it as a trade center.
• Perambur - After Pirambu trees in the locality
• Pondy Bazaar - After Soundarapandian.
• Poonamalee - Poo Irundha Alli, abundance of Jasmine.
• Porur - Por means war. Believed to be a battlefield since ancient times. Contans the Arcot road which connects the Arcot Nawab with the capital. Home to a chola temple, etc.
• Purasaiwakkam - Due to the Purasai trees
• Saidapet - Named after Sayyid Shah
• Sowkarpet- after the Sahukars who settled there.
• Sunguvar Chattram - Again, Sungam means tax. Chattram is a Inn/ Resting Spot. This is presumably the other end of the city to attract taxes.
• Teynampet - Due to abundance of the Cocnut trees in the region
• T.Nagar - After Sir Thyagaraya
• Thiruvanmiyur - Named after Valmiki
• Thirisoolam - Home to Thirisoolanathar temple on the hill.
• Thondaiyarpet - Coined by Masthan Sahib after his birthplace Thondi.
• Thousand Lights - Derives its name from the thousand lights that were lit when an Indian National Congress Annual Session was held for the first time in Madras
• Triplicane - Thiru Alli Keni, Pond with the Alli flowers: Parthasarathy temple tank.
• Vadapalani - Palani in the North, after the famous Murugan temple
• Vandalur - Derives its name from Vandal, which is the sediments from a river.
• Villivakkam - Real name - Vilvaaranyam. A very old Shiva temple is situated here. Built by sage Agasthiyar. A lot of Vilvam trees were found there. Hence it got the name Vilva Aaranyam. As days pass by the name got changed into Villivakkam.... 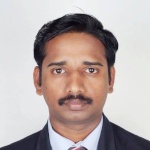